COSSACK GRAVES AT PONTA DELGADA
A recent visit to Ponta Delgada in the Azores by HMS SCOTT provided the opportunity for someone to check on the graves of two COSSACK men who were buried there in 1941.
When HMS COSSACK was torpedoed and sunk in October 1941 many survivors were pulled out of the sea by boats from HMS LEGION and HMS CARNATION. Two taken aboard the Legion were Stoker 1st Class H.J. Springall and Able Seaman R.J.G. Wallace. Both were badly wounded and needed urgent hospital treatment. Legion steamed for Ponta Delgada, the Azores being neutral territory, and landed them there. Unfortunately they both died of their wounds in hospital and were buried in the British Protestant Cemetery.

The photograph below showed, in our view, a lack of care and attention if not neglect. Consequently a letter was sent to the Commonwealth War Graves Commission with the photographs asking whether something could be done to improve things.

The CWGC responded that, in their view, the photographs show no evidence of a state of neglect as the headstones are accessible, clearly marked and free from disturbance. They said that because of the remoteness of the location they rely on the services of the local church. They said that the cemetery caretaker was currently on leave but we could be assured that both the grass and the headstone cleaning would be tended to on his return. Our letter had been passed onto the Area Horticultural Manager who is reviewing the current maintenance agreements with this and other remote sites in the Azores with a view to establishing a more consistent maintenance regime.

We hope that anyone visiting Ponta Delgada will look in on the cemetery and keep us up-to-date with photographs. 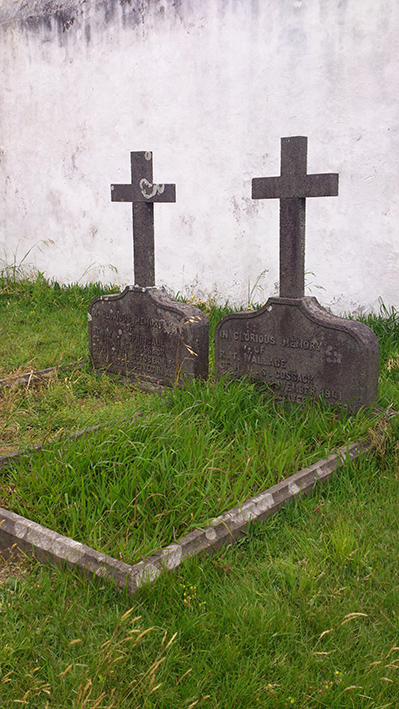